Have you even noticed your LED spotlights, LED downlight or other LED lamps’ CCT (color temperature) changed? Please note what we are talking is not the new technology color changing LED lights, but the common single color LED lamps. For example, you buy a 3000K LED spots, the color shift to 4000K or even higher CCT range after half a year. Why?

More and more manufacturers and users pay attention to the reliability of LED products. The LED chip is an important material, and its quality directly affects the stability of the LED products. It often happens LED lights cannot operate very well or fail due to LED chips problem, such as LED color temperature drift and obvious lumen reduction.

As a LED products manufacturer, we were frequently asked by these questions. To give customers a professional answer. We collected some failure LED lamps from the market.

In this article, we will tell you 4 main reasons why the LED color temperature changed.

The LED chips will continuously create heat when the LED lamp is working. Many LED lamps are installed in a very small fixture. If the lamp works 24 hours per day and constantly operate over 1 year, the excessive use will affect the color temperature of the chip.

(1) Foreign Object Inside the Packaging Glue

The surface of the failure chip partially turns to black. A black foreign object was found after opened the glue. After checked it by scanning electron microscopy and energy dispersive spectroscopy (SEM & EDS) of the foreign object, we found the main components are aluminum (Al), carbon (C ), oxygen (O) element. Combined with user feedback failure background, it shows that the foreign object was introduced in the packaging process.

Generally sulfur, organic disulfide and polysulfide sulfur-containing substances can be used as vulcanizing agent to cause the silicon vulcanization crosslinking reaction and change the structure, showing yellow and dark chip, and the increased thermal decomposition temperature.

In conclusion, the LED manufacturers should consider the compatibility of different materials to avoid unreliability when design and produce the LED products.

The led lamp color is changed when it’s in the warehouse. The failure LED chip glue orange color changed to pale yellow. Detected by I-V characteristics testing, the chip can operate normally and the I-V curve is regular. The only difference is the output brightness. Mechanically opening the package glue, we discovered transparent particles remain on the surface. Tested by SEM & EDS, it showed high levels of strontium (Sr) elements.

The connecting surface of the bracket and the packaging glue is also detected with high levels of strontium (Sr) elements and barium (Ba) elements, as shown below. 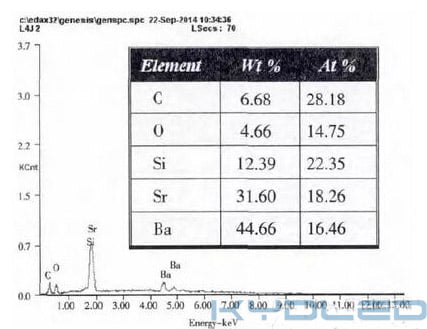 In contrast, the qualified chip bracket surface is clean. And the surface main ingredient is silver (Ag) and a small amount of carbon (C) element. No strontium (Sr) elements have been detected. And no strontium (Sr) and barium (Ba) elements was found in its packaging glue and bracket contact surface.

Therefore, the failure LED chips due to the silicate Fluorescent settle to the glue button and bracket, resulting in inconsistent light refraction, dispersion and color temperature drift.

The failure chip was covered by a layer of foreign object which contain tin (Sn), lead (Pb) elements.

Obviously, the LED chip pin was attached excess solder paste. The molten solder along the pins climbing to the connected surface form a coating layer. Thus, the reason of this case is weld solder went to the surface when the LED lamp assembly during welding, forming a cover, which cause the discoloration.

Since the impure material or pollution or other reasons, it was introduced of sulfur (S), chlorine (Cl) and other corrosive elements, the metal bracket prone to be corroded, resulting in discoloration, leakage and other failure phenomena.

The poor bracket coating will have holes after aging testing. The nickel will spread to the silver layer through the holes, resulting the black silver layer and color shift.

In the above cases, the bracket discoloration and corrosion failure proportion is highest. Therefore LED chip and bracket producer should take measures to prevent it.
For example,

If you have any question, KYD sales team and engineers are always here.

Drop Us an Email 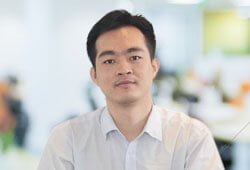 Hi, I am Brian Zeng, the Co-founder of KYDLED. We will always be your trusted LED lights supplier in China. Let our 12 years LED lights manufacturing experience to boom your business!

Get a Quick Quote

Established in 2008, KYDLED are committed to designing, developing and producing various LED lights. As a top LED lights manufacturer in China, we have rich OEM service experience.

Get a Quick Quote

Our Team will reply you in 12 hours or less.